Decentralized code forge, based on XMPP

With the recent announcement concerning the biggest known centralized code forge owner change, we have seen back here and there discussions about the creation of a similar tool, but decentralized.

I've used this occasion to recall the work done to implement tickets and merge requests in Salut à Toi (SàT), work which was relatively unoticed at the time of writing, about 6 months ago.

Now, I would like to bring some details on why building those tools.

First of all, why not the big forge? After all, a good part of current libre software is already using it! Well first it's not libre, and we commited ourself in our social contract to use libre software as much as possible, infrastructure included. Then because it's centralized, and there too our social contract is pretty clear, even if it's not as important for infrastructure as it is for SàT itself. Finally, because we are currently using Mercurial, and the most famous forge is build around Git.
We do not hide the fact that we already ask ourselves wether to use this platform or not in general assemblee (cf. minutes – in French –), we were mainly interested in the great visibility it can offer.

« It's centralized? But "Git" is decentralized! » is a point we are ofter hearing and it's a true fact, Git (and Mercurial, and some others) is decentralized. But a code forge is not the version control system, it's all the tools arount it: hosting, tickets, merge/pull requests, comments, wikis, etc. And those tools are not decentralized at the moment, and even if they are often usable throught a proprietary API, they are still under centralization rules, i.e. rules of the hosting service (and its technical hazards). This also means that if the service doesn't want a project, it can refuse, delete, or block it.

Centralization is also a technical facility to catalog and search project… which are on the service. Any external attempt will then have more difficulties to be visible and to attract contributors/users/help. This is a situation we know very well with Salut à Toi (we are not present on proprietary and centralized "social networks" for the same reasons), and we find it unacceptable. It goes without saying that concentrating projects on a single platform is the best way to contribute and exacerbate this state of affairs.
Please note, however, that we are not judging or attacking people and projects who made different choices. These positions are linked to our political commitment.

Why, then, not using existing Libre projects, already advanced and working, like Gitlab? Well, first because we are working with Mercurial and not Git, and secondly because we would put ourselves here too in a centralized solution. And there is an other point: there are nearly no decentralized forges (Fossil maybe?), and we already have nearly everything we need with SàT and XMPP. And let's add that there is some pleasure to build the tools we are lacking.

SàT is on the way to be a complete ecosystem, offering most, if not all, the tools needed to organise and communicate. But it is also generic and re-usable. That's why the "merge requests" system is not linked to a specific SCM (Git or Mercurial), it can be used with other software, and it is actually not only usable for code development. It's a component which will be used where it is useful.

To conclude this post, I would like to remind that if we want to see a decentralized, ethical and politically commited alternative to build our code, organise ourself, and communicate, we can make this real by cooperating and contributing, being with code, design, translations, documentation, testing, etc.
We got recently some help for packaging on Arch (thanks jnanar and previous contributors), and there are continuous efforts for packaging in Debian (thanks Robotux, Naha, Debacle, and other Debian XMPP packagers), if you can participate, please contact us (see our official website), together we can make the difference.
If you are lacking time, you can support us as well on Liberapay: https://liberapay.com/salut_a_toi. Thanks in advance! 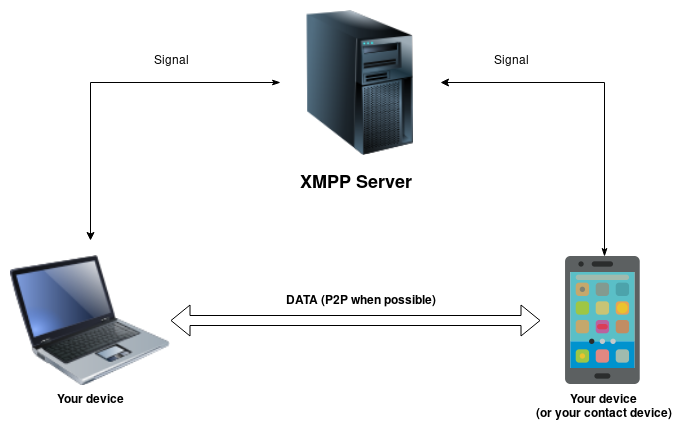 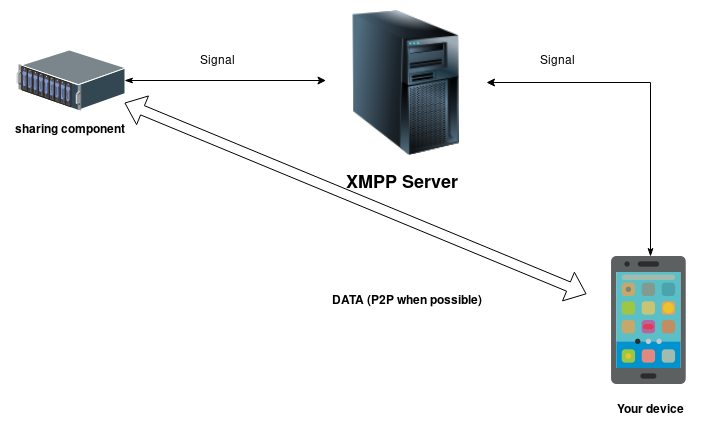 File sharing landing in next release of Salut à Toi

SàT has been able to send or receive files for years, either directly when 2 people are connecting at the same time, or via an HTTP upload on the server. It is now possible to share a file hierarchy, or in other words one or several directories. There are 2 main uses cases: using a component, or a client.

The first way to use file sharing is from device to device. It can be used, for instance, to share pictures taken from your phone with your desktop computer, or to quickly give access to discussion papers to your coworkers. To handle permissions, you just have to give the JIDs (XMPP identifiers) of allowed people.

The transfer is using Jingle technology, which will choose the best way to send the file. That means that if you are on the same local network (e.g. the previous case of sharing your phone picture with desktop computer, when you're at home), the connection will stay local, and the server will only see the signal (the data needed to establish the connection).

But if your devices are not on the same local area network, connection is still doable, and it will try to be direct when possible.

Above you can see how easy it is to share a directory with Cagou, the desktop/Android frontend of Salut à Toi.

SàT can now act as a component (which is more or less a generic server plugin), and a first one allows a user to upload, list and retrieve files.

This is really handy when you want to keep some files private for later use (and access it from any device), or to share a photo album, for instance, with your family.

This is on the way to a service similar to "cloud storage", except that you may keep control on your data.

As you can see, it's pretty similar to the workflow with client.

File transfer is currently unencrypted, but encryption is planed soon, either with OX (OpenPGP) or OMEMO.
The base feature is there and working, but some improvements are planed at more or less short term: quotas, files synchronization, e2e encryption, advanced search.

You'll find instruction on how to use this feature on the wiki.

Of course you'll need to use development version, don't hesitate to ask for help on SàT room : sat@chat.jabberfr.org (or via browser).

A package is now available for Cagou on AUR for Arch Linux, thanks to jnanar.

SàT is a huge project, with a strong ethical root. It's unique in many ways, and needs a lot of work. You may help its success either by supporting us on Liberapay or by contributing (check official website or join our room for details).

Next post will be about alpha release, stay connected ;)

Among many novelties of Salut à Toi in the next release (0.7), one has specially big potential: Libervia (the web frontend) is now a web framework.
"Yeah but there already so many of them!" I 've heard you saying… That is true, but this one is decentralized.

Building on standards, having tools for decentralization

So, Libervia is based on SàT and XMPP in order to help you to build or rebuild the web. But why? Well, first the authentication, which is used on most websites nowadays, use the account you alread have. No, I'm not talking about the account on the big blue stuff or the noisy bird, but about your XMPP account, the one you are using with SàT, Movim, Gajim, Conversations or Pidgin, the one, in which your data can be located in your living room, and the one in which you can use any name you choose; the one that does not tract your activity.

The developer doesn't have to worry about this, and the users don't have to create yet another account on each website, or to use an account from a big central website (and then tell to web data hoovers where, when and to what you did connect).

Other advantage: we take profit for existing software. If you want to integrate other authentication ways (for instance if you want to use your GNU/Linux accounts), you just have to activate the suitable thing on your server (check this prosody list for instance, you'll surely find similar lists for other servers).

XMPP is not a single technology, but rather a basis for a variety of coherent technologies, and pubsub is one of them. As a reminder, with it you can store data (or "items") in "nodes" (which can been seen as tables or collections in other databases), on "services".

A service can be anywhere on the network : in the same location as your web server, on the other side of the Earth, on the intranet or on a .onion in Tor network. Of course it's possible to keep data locally if needed, in particular for caching.

Let’s talk about cache, pubsub has a really nice property: we can subscribe to a node to be notified when there are changes on it (new data, data update or deletion). Taking benefit from this gives Libervia an automatic cache system: a page can be automatically put in cache, and later can be invalidated as soon as a modification happen. That is an other thing to simplify developer's life, and to improve the speed for the user.

Libervia has been thought to make things easy :

The framework is entirely based on template engine (jinja2). It is really straightforward to create new themes (from doing simple CSS change to major changes in pages structure). You just have to create a new directory with theme name, and to modify what you want, and only what you want: pages from default theme will be used if needed.

Integration between server and client

A bunch of tools are there to facilitate integration between client (in the browser) and the HTTP server. For instance, you just have to set "dynamic = True" in your Libervia page on server side to automatically activate a bidirectionnal dynamic communication system with the browser (based on websockets). A method can be used to send data at any time to the page, and an other one is called when data are emited from the browser.

This will go deeper in the 0.8 release, with the planed integration of Python to Javascript transpileur/interpreters. Libervia is using so far Pyjamas, a project which is not maintained anymore and which is transpiling an obsolete Python 2. To avoid future blocking on a single option, developers will have the choice to use a Python transpiler/interpreter (Brython and Transcript are planed), Simple Javascript ("vanilla"), or if they really like pain, any currenly popular Javascript framework.

Templates are built to be reusables, so it's easy to include, for instance, comments in page.

I'll stop here for features, though the list is not finished (it's for instance possible to generate static website à la Pelican or Hugo).

This new tool has already been used in severals features in the incoming release, notably with the tickets or merge requests handlers that I have announced recently.

Next release of Salut à Toi will be an achievement, the first version ready for production, and is now a whole ecosystem to communicate, create, or do collaborative work, compatible with the rest of XMPP family.

If you want to stay up to date, follow my blog (which is using Libervia), or join us on our room sat@chat.jabberfr.org.

If you want to support us, you can either join the association, or help us on Liberapay.

Other news to come soon…